Pyrolysis is the thermal decomposition of organic matter in an oxygen-reduced and controlled environment. The process variously produces forms of charcoal, gas and liquid, depending on the nature of the feed material, the plant design and the process temperatures (typically between 400 & 1000oC).  When applied to soil as an amendment, charcoal is termed ‘biochar’.  Pyrolysis is not burning (which produces mostly gas plus some ash).  A significant part of the charcoal is recalcitrant (stable), unlike the labile (unstable) carbon associated with materials like mulch (which, as any gardener knows, soon decays to gas, particularly methane).  In the recalcitrant biochar form, charcoal is stable for a long time, centuries or millenia.  The charcoal is the same material that is used in art classes (as in primary schools) as a drawing material.

Biochar was produced by Amazonian Indians, with deposits dating back thousands of years.  It is known there as terra preta del indio (black earth of the Indians).

Pyrolysis can operate in batch or continuous feed plants. Small facilities tend to be batch feed and could be as small as a 10 litre drum.  Larger plants (many tonnes per day) are more amenable to being continuous feed; they are more efficient and can collect the gas as an energy source (such as for heating greenhouses or generating electricity).

Scientific papers list up to 55 different uses of biochar, truly a wonder substance.  Some are listed below.

By converting the carbon of “waste materials” to the long-term stable form of carbon, biochar, pyrolysis provides a superb form of carbon sequestration (or ‘drawdown’), probably without equal.  Drawdown is increasingly recognised as a fundamental part of our move to a post-carbon society.

Biochar is highly porous, with each gram providing 300-400 m2 of surface area.  This has agricultural benefits.  Firstly, it holds water, so that a biochar-amended soil needs less water applied.  Secondly, it provides a home for mycorrhizal fungi, which are critical to the takeup of soil nutrients by plant roots.  Thirdly, soluble nutrients like N, P, K and others can be held in the water contained within the biochar, limiting soluble nutrient runoff to streams.

Biochar has been found to enable a lower fertiliser application rate.

Field trials have shown biochar to produce higher plant yields, especially in poor soils (hence those requiring remediation). When applied to soil, because the biochar is so stable, it acts like an effective catalyst.

Biochar can be used to remove difficult residues like pharmaceuticals from recycled water.

Adding biochar to asphalt lowers application temperature while producing a tougher material less susceptible to hot day melting. As well it can be used in farm animal feed supplements and in soil, water and gas pollution remediation. 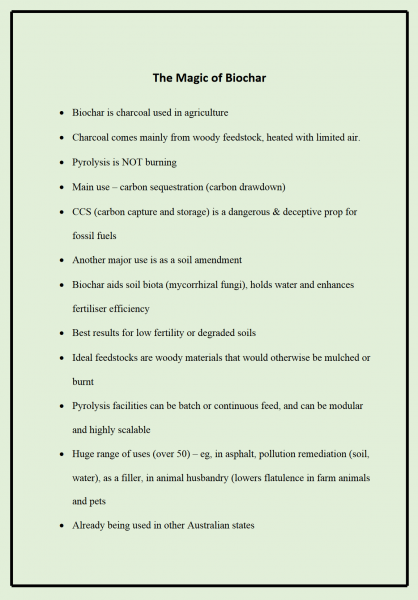 Biochar Production in Australia and the World

The technology is not new; it is well known and well established throughout the world, but not in NSW.  In Australia, large efficient plants are operating in the Logan Shire in Queensland, eastern Melbourne, the Mount Gambier shire in SA and in Western Australia.  Elsewhere China dominates global production, with other production including facilities in Germany, New Zealand and North America.