We are a volunteer group of people from the Blue Mountains, Australia, working together to create community-owned renewable energy projects right here in our unique World-Heritage listed area.

Learn more about what community energy is here.

How did we start?

Soon after, Climate Action Blue Mountains members invited community energy expert Nicky Ison, a Founding Director of the Community Power Agency, to visit the Blue Mountains and assist in developing the first steps of such a project. Nicky spoke at an information night, focused solely on community-owned renewable energy, in late November 2011 and followed that with a ‘first-steps’ workshop on 3 December.

While community energy is a mature part of the energy sector in parts of Europe and North America, it is still in its infancy in Australia. When residents of the Blue Mountains hatched the idea of building community-owned renewable energy generation locally, there was a single existing community energy project, Hepburn Wind, which had only officially launched a month before our first steps workshop. In other words, we had a steep learning curve and spent considerable time investigating group structures, governance options, renewable energy technologies, business models and more.

Working in between day jobs, family commitments and more, we slowly built the size of the group, put in place operating structures, defined our vision and goals, reached out to other local organisations including council and researched technology, finance and legal issues.

Inspire and facilitate local, community owned renewable energy generation and energy efficiency initiatives, for the benefit of the environment and the community.

Unlike many other community energy groups, who start with a specific project in mind when they form, BMRenew has a big vision and knew early on that we were open to different technologies to achieve our aims. However, selecting a specific technology and basic parameters like scale was one of the key questions that we explored early on. We initially narrowed our focus to three options:

The group, some members in particular, did a lot of work investigating the waste-to-energy option taking it to a near pre-feasibility stage. However, a draft change of policy by the NSW Government made it unproductive to continue pursuing the project – that policy has now reversed, making the waste-to-energy plant a live option again. However, in the interim, the group pursued commercial solar as an alternative and is focused on delivering a first solar project before taking on a different technology. 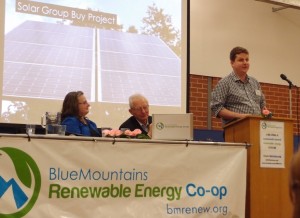 In August 2013, we held the official public launch for the Blue Mountains Renewable Energy Co-op (read more about it here) and by the end of the same month, formed officially as a registered co-operative with a board of nine directors. We are currently (as of mid 2014) a non-distributing (or non-trading) co-operative with no provision for issuing shares – this makes us a not-for-profit entity legally, but this may change once we work out the final details of the financial model for our first commercial solar project and we are committed to finding a model that makes a sound return for local investors as well as returning benefits to the community.

Our current projects are:

We also have four loose working groups: Technology, Community Engagement, Finance and Facilitation – see the diagram below. Working groups report to members of the Co-op at monthly meetings, held every 2nd Saturday of the month at the Mid Mountains Neighbourhood Centre from 12pm to 2pm.

Does this all sound like something you would like to be part of? We are building an exciting future for the Blue Mountains, one where we can take control of – and responsibility for – our own energy production and deliver lasting benefits to the community in terms of local jobs, sustainability, investment, community and more. The best thing you can do first is join the co-op, then check out our get involved page and get in touch if you’d like to chat about what we’re doing and how you can help us make it better. Enquiries: Michael on 0421 210 074 or info@bmrenew.org

We chose the legal structure of a co-operative because it matches our values and reinforces the way we want to do business.

Co-operatives are based on the values of self-help, self-responsibility, democracy, equality, equity and solidarity. In the tradition of their founders, co-operative members believe in the ethical values of honesty, openness, social responsibility and caring for others.

Co-operatives are formed around seven principles:

This is roughly how our working groups interact and take responsibility for different aspects of the organisation.