With an article in this week’s Blue Mountains Gazette, we have launched our first crowd-funded community solar project.

With your help, the Chip in for Solar project aims to raise $4000 to pay for a solar installation on Winmalee Neighbourhood Centre’s roof – in addition to the $4000 generously donated by Westpac as part of its Natural Disaster Recovery Fund.

For more details and to find out how to chip-in, go to: bmrenew.org/chip-in

Here’s what the Blue Mountains Gazette had to say: 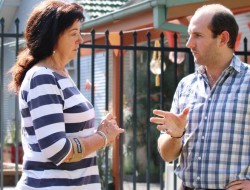 Volunteer group Blue Mountains Renewable Energy Co-operative (BMRenew) hopes to bring a sunny start to 2015 for the Winmalee Neighbourhood Centre by fundraising for a rooftop solar system that will cut their power bill in half.

The co-operative expects a well-suited solar system will save the neighbourhood centre up to $900 a year in electricity costs, allowing savings from each power bill to be channelled into its bushfire recovery programs, which are ongoing since the October 2013 fires.

“BMRenew’s mission is to create a community-owned renewable energy future for the Blue Mountains, and what better place to start than an organisation already committed to helping our community,” said Erland Howden, Chairman of BMRenew.

The Winmalee Neighbourhood Centre provides diverse community support to those experiencing financial and other hardship in the areas of Winmalee, Yellow Rock and Hawkesbury Heights.

“The centre acted as a hub during the 2013 bushfires, coordinating essential supplies and services including food, linen, clothing, no interest loans, counselling and financial assistance,” said Morna Colbran, manager of Winmalee Neighbourhood Centre.

“Over 12 months on we’re continuing to provide this much-needed assistance – everyone acknowledges it will be a five-year recovery process for those affected.

“All of our community support programs are funded by tax-deductible donations and grants, so having solar panels to reduce our bills will make a real difference,” said Ms Colbran.

The co-operative hopes to raise $8000 for a local installer to put in a 4kW solar system. Mr Howden is confident many in the community will support the project.

“This is a great opportunity for locals to be part of the neighbourhood centre’s important work that builds on the fairness and resilience we all appreciate in the Mountains.

“As they experienced last year during the bushfires, demand for Winmalee Neighbourhood Centre’s important services can surge in times of crisis. Installing solar will reduce operating costs and allow the centre to focus more of their limited funds on supporting the community,” said Mr Howden.

“It’s great to see Winmalee Neighbourhood Centre supporting renewable energy as a way of being more self-reliant and energy secure – not to mention having a lighter impact on the environment.”

Christmas came early for the project when Westpac announced in December it would be contributing $4000 towards the cost of the solar system as part of its Natural Disaster Recovery Fund.

“We’re really grateful to Westpac for getting behind the project because it means we’ve got a big head start in raising the funds to pay for the solar system,” said Mr Howden.

The support is part of $92,145 in grants to help fund 12 local community projects from Westpac Group’s Natural Disaster Recovery Fund, providing much needed support and financial assistance to the Blue Mountains region.

“Recovery from a natural disaster takes a long time and we are proud to be able to fund these projects which we know are important amongst the Blue Mountains community,” said David Garner, Westpac bank manager Springwood.

Chip in to help BMRenew reach their $8000 target by making an online donation at www.bmrenew.org