We’re incredibly excited that our crowd-funding campaign to donate a solar system to the Winmalee Neighbourhood Centre is now complete!

A very special thanks to the many amazing and generous people who chipped in to help a local community organisation run from clean energy!

The final step in the project – installation of a plaque at the entrance to the neighbourhood centre acknowledging all the generous donors – was covered recently in the Blue Mountains Gazette: People power funds solar power at Winmalee Neighbourhood Centre.

The new 4.5kW solar system was installed in December 2015 by Katoomba-based business Sun Kissed Solar. We estimate it will reduce Winmalee Neighbourhood Centre’s electricity costs by around $900 per year – money they can use directly for critical community services, including a vital bushfire recovery program. 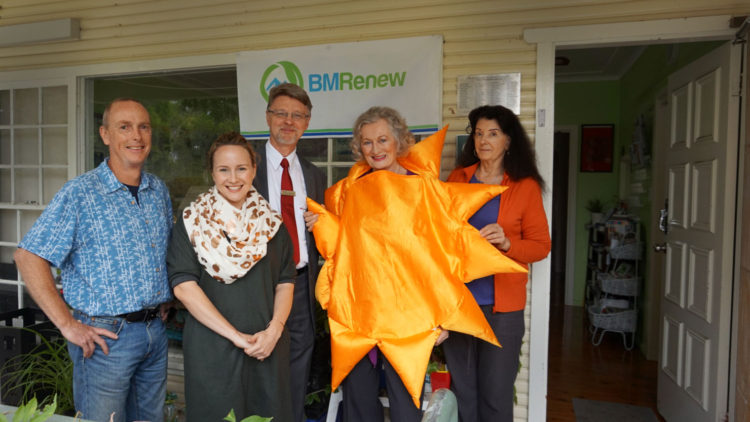 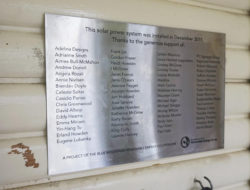 The sun shining on Winmalee Neighbourhood Centre is lowering its power bills thanks to community generosity and a bushfire recovery grant.

A fundraising campaign to install solar panels on the centre raised over $3500 through crowd-funding with a further $4000 from Westpac Banks’ Natural Disaster Recovery Fund.

Michael Skeggs, Chair of the Blue Mountains Renewable Energy Co-op (BMRenew) that initiated and oversaw the project, said the 4.5kW solar system is expected to reduce the neighbourhood centre’s electricity costs by around $900 per year.

“We are delighted that the community and business have both contributed to this project that makes a very practical contribution to the neighbourhood centre while reducing reliance on fossil fuels,” he said.

Morna Colbran, manager of Winmalee Neighbourhood Centre said the money saved on power bills would be put to good use. “It will be spent on critical community services for people needing help in Winmalee, Yellow Rock and Hawkesbury Heights, including our ongoing bushfire recovery assistance in the wake of the 2013 fires.”

Westpac Springwood Bank manager Richard Wadick said, “This is a great outcome from a relatively small investment with long term benefits for our community.”

Mr Skeggs said that BMRenew is now exploring a similar project for the Mid Mountains Neighbourhood Centre in Lawson.

“BMRenew is a volunteer-run group that seeks to increase Blue Mountains prosperity, energy security and sustainability by expanding community ownership and access to renewable energy,” he said.